Yoga for the Wounded Heart

Download
Guest Info & Links: Tatiana Forero Puerta, Author
From the Show: Naturally Savvy
Summary: Tatiana Forero Puerta learned to use yoga to heal her scars, open her soul to forgiveness, and allow her to reconcile herself with a past that had threatened to snuff out her life.
Duration: 21:23
Host: Andrea Donsky, RHN and Lisa Davis, MPH

Guest Bio: Tatiana Forero Puerta, Author
Tatiana Forero Puerta is originally from Bogotá, Colombia. A graduate of Stanford, New York, and Columbia universities, she has taught philosophy and yoga for a decade, including her post as an adjunct faculty member at New York University and the City University of New York.

A columnist for New York Spirit, Park Slope Reader, and Elephant Journal, Tatiana is a recipient of the 2017 Pushcart Prize for poetry and a finalist for Blueshift Journal’s prize for writers of color. Her work has appeared in Able Muse, Moon River Review, Juked, JOY: Journal of Yoga, and elsewhere.

With over one thousand hours of yoga training and over a decade of teaching experience, Tatiana’s classes and private sessions work to explore, uncover, and discover the body’s innate power and wisdom. Strongly tethered to theoretical principles of equanimity and balance, Tatiana works not just with postures, but with bodies in postures, emphasizing alignment, integrity, and attunement in the aim of using the practice of yoga as a light that increases our awareness, develops our potential, and opens a greater vision–not only on the mat, but in our lives.

Tatiana is also core faculty at Peaceful Generation Now, a New York-based mindfulness program focused on bringing mindfulness practices to educators and school administrators in the New York tri-state area, with the hope of cultivating peaceful classrooms. She lives and teaches in NY. 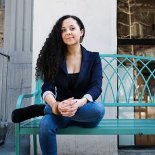 Orphaned in her early teens and shuttled between abusive foster homes, Tatiana Forero Puerta found herself in her early twenties in New York City, haunted by the memories of her tumultuous youth and suicidal.

Following emergency hospitalization, she was advised by her doctor to take up yoga. Over days, weeks, months, and then years, she embraced yoga’s honesty and discipline -- delving more deeply into its wisdom, literature, and, vitally, its practice.

In so doing, yoga healed her scars, opened her soul to forgiveness, and allowed her to reconcile herself with a past that had threatened to snuff out her life.

Tatiana's book, Yoga for the Wounded Heart, is an unsparingly honest memoir of a childhood lost and of courage and resilience gained. It’s also an exploration of the fundamentals of yoga... as a technology that focuses our awareness, as a practical application of mindfulness and attention to what is really going on in our lives and bodies, and as a vehicle for the body to guide the mind and heart toward healing.

Listen as Tatiana joins Lisa Davis to share her personal story, as well as how yoga is a viable tool to heal physical, mental, emotional, and spiritual health.
Tagged under

More from this show . . .
Prev
Next
Best and Worst Foods for the Keto DietThe Wellness Way Approach