Growing up as an overweight child, Lori was a victim of bullying and consistently told she would struggle with her weight her entire life due to “bad genetics.” Home schooled in high school, her family’s restrictive religion did not allow for sports or extra curricular activities, so Lori became fascinated with fitness after watching a fitness competition on TV. She dedicated the next two decades educating herself on food and fitness, and not only improved her body, but developed the mental strength to persevere through numerous life-changing personal hardships.

After three years of unsuccessfully competing in fitness competitions, Lori went on to win three world championships in one year, setting a world record in the Federation, but still continued to get turned down from her dream of becoming a fitness magazine cover model. Eventually, Lori decided to stop chasing validation from magazines and sponsors and create her own success through building her online business, The Bliss Project. As soon as she shifted her focus to building a tribe and helping others, the fitness covers came—many of them.

Throughout her career, Lori has regularly appeared on the covers of and published articles for Oxygen Magazine, STRONG Fitness Magazine, Health & Fitness Magazine and Prosper Magazine. She has also been featured on NBC, Fox, and TLC networks. But she realized that the titles and covers did not bring her the happiness that she thought they would, and continued to focus on building her business of self-empowerment for women.

Through her unique coaching methods, her “Earn Your Happy” podcast, online programs and mental transformation retreats, Lori has helped thousands connect with their soul, transform their bodies, empower their minds, gain financial independence, and fall in love with themselves and their lives.

Lori’s debut book, A Tribe Called Bliss is launching in May 2018 with the goal of helping women everywhere build a meaningful “tribe” or support system to get them through life’s tough moments and be unapologetic about the pursuit of their bliss.

Lori currently resides in Los Angeles with her husband, Chris, and their dog. Lori and Chris are both running multiple 7-figure businesses from their home, with Chris owning his own business mentorship brand and podcast called “For The Love Of Money.” Lori and Chris are passionate donors/advocated of the Make-A-Wish and the Unstoppable Foundation. 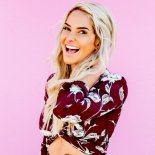 In a world where it’s easy to pick up thousands of friends and followers from all around the world, how can we cultivate meaningful relationships that enrich our lives?

Lori Hader is a leading expert in the field of transformational work, mindfulness, and self-love.

Lori joins host Erica Spiegelman to explore ways to break through the online world and make real-life connections, and discuss the physical, mental, and emotional benefits of having a strong circle.
Tagged under