Download
Guest Info & Links: Travis Stork, MD
From the Show: To Your Good Health Radio
Summary: Your gut microbiome has a great deal to do with your weight, specifically belly fat.
Duration: 21:45
Host: David Friedman, DC

Based on his experiences in the ER, Dr. Stork is driven to teach people how to prevent illness before it happens. As a motivational speaker on the topic of health and wellness, Dr. Stork teaches people how to achieve optimal health by focusing on the 200-plus seemingly inconsequential health decisions people make throughout each day.

Dr. Stork is on the Medical Advisory Board for Men’s Health magazine and is the New York Times bestselling author of The Doctors’ Diet, in addition to The Lean Belly Prescription and The Doctor Is In: A 7-Step Prescription for Optimal Wellness and The Doctor’s Diet Cookbook.

An avid outdoorsman, Dr. Stork is a devotee of mountain and road biking, whitewater kayaking and hiking with his dog. 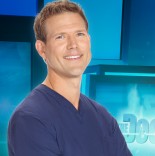 Your gut microbiome has a great deal to do with your weight, specifically belly fat.

Get Your Greens without the Mess, Organifi Green Juice. Use code “goodhealth” at checkout to save 20%! - sponsor

Dr. Travis Stork joins Dr. David Friedman to share tips on how to maintain healthy bacteria in the gut while increasing your fiber intake, which is responsible for a large component of one’s gut bacteria.

Listen in to gain a better understanding of what exactly is going on inside your gut and how it affects your weight and health.

Visit organifi.com and use discount code “goodhealth” to receive 20% off your order!!
Tagged under

More from this show . . .
Prev
Next
Whole30 Day by Day: Keep Your Nutrition on TrackEncore Episode - Chew on This with Kim Barnouin: Stop Stress PLUS Aspirin's Pros & Cons