Encore Episode: How to Have Conversations that Matter

Download
Guest Info & Links: Celeste Headlee
From the Show: To Your Good Health Radio
Summary: Many of us have lost the ability to have a meaningful conversation.
Duration: 26:32
Host: David Friedman, ND, DC

Celeste Headlee is an award-winning journalist, professional speaker and bestselling author of Heard Mentality and We Need To Talk: How To Have Conversations That Matter. In her 20-year career in public radio, she has been the Executive Producer of On Second Thought at Georgia Public Radio and anchored programs including Tell Me More, Talk of the Nation, All Things Considered, and Weekend Edition. She also served as co-host of the national morning news show, The Takeaway, from PRI and WNYC, and anchored presidential coverage in 2012 for PBS World Channel. Celeste’s TEDx Talk sharing 10 ways to have a better conversation has over 20 million total views to date.

As an NPR host and journalist, Celeste has interviewed hundreds of people from all walks of life. Through her work, she has learned the true power of conversation and its ability to bridge gaps or deepen wounds. In a time when conversations are often minimized to a few words in a text message and lack of meaningful communication and dialogue abounds, Celeste sheds a much-needed light on the lost and essential art of conversation. Celeste is an expert in human nature, reclaiming common humanity and finding well-being and frequently provides insight and commentary on what is good for all humans and what is bad for us, focusing the best research in neuro and social science to increase understanding of how we relate with one another and can work together in beneficial ways in our workplaces, neighborhoods, communities, and homes. As a mixed-race journalist of black and Jewish descent, Celeste also speaks candidly about how to converse on race and other difficult subjects.

Celeste serves as an advisory board member for Procon.org and The Listen First Project and received the 2019 Media Changemaker Award. Along with artist Masud Olufani, Celeste is the host of PBS’s new weekly series Retro Report which will debut in the fall of 2019. She is also a co-host for season three of the Scene on Radio podcast – MEN. Her work and insights have been featured on TODAY, Psychology Today, Inc., NPR, Time, Essence, Elle, BuzzFeed, Salon, Parade, and many more. Celeste has presented to over 100 companies, conferences and universities including Apple, Google, United Airlines, Duke University, Chobani and ESPN. She lives in Washington, D.C. 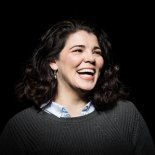 Harnessing the power of communication is a fundamental leadership discipline. Mastering the right conversation skills can build trust, inspire loyalty, and create confidence.On the other hand, not communicating properly can destroy friendships, ruin a marriage, and stall a career.Most conversations today are limited to text messages and social media banter. Many of us have lost the ability to have a meaningful conversation.Celeste Headlee, an expert in the true power of communication, joins Dr. Friedman to discuss how you can improve (and even perfect) your communication skills.
Tagged under

More from this show . . .
Prev
Next
The Silent Heart KillerNatural Back Pain Relief