Download
Guest Info & Links: Robert F. Kennedy, Jr
From the Show: To Your Good Health Radio
Summary: It's commonly said the most powerful position on the planet is the President of the United States. Actually, that title should go to Dr. Anthony Fauci, Chief Medical Advisor to the President.
Duration: 39:17
Host: David Friedman, ND, DC

Guest Bio: Robert F. Kennedy, Jr
Robert F. Kennedy, Jr is the founder of Waterkeeper Alliance, as well as Founder, Chairman of the Board, and Chief Legal Counsel for Children’s Health Defense, and of counsel to Morgan & Morgan, a nationwide personal injury practice.

Mr. Kennedy is an esteemed author, with a long list of published books including the New York Times’ bestseller, “Crimes Against Nature.” Mr. Kennedy was named one of Time magazine’s “Heroes for the Planet” for his success in helping Riverkeeper lead the fight to restore the Hudson River. His reputation as a resolute defender of the environment and children’s health stems from a litany of successful legal actions. He received recognition for his role in the landmark victory against Monsanto, as well as in the DuPont Case that inspired the movie “Dark Waters” (2019). 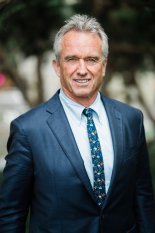 It's commonly said the most powerful position on the planet is the President of the United States. Actually, that title should go to Dr. Anthony Fauci, Chief Medical Advisor to the President. He's the highest-paid federal employee and holds the key to our health care. He advises the Pentagon, foreign governments, and the WHO. Dr. Fauci together with his friend Bill Gates controls the media, scientific journals, government agencies, influential doctors, and scientists. They flooded the public with fearful propaganda and they sensor anyone opposing them.

Joining us today is returning guest Robert F. Kennedy Jr. His #1bestselling book The Real Anthony Fauci pulls back the curtain and exposes some ulterior motives behind mask mandates, quarantines, mandatory vaccinations, and the boosters. It's profits before people.

Robert F. Kennedy Jr. is an attorney as well as an environmental and humanitarian activist. As a trial lawyer, he's taken on the world's most powerful corporations and held them accountable for harming the environment. He was named one of Time Magazine's Heroes For The Planet as the founder of the Children's Health Defense.
Tagged under

More from this show . . .
Prev
Next
What Your Poo Is Telling YouThe Connection Between Hope & Health