Today we have with us special guest Renee Taylor, who stars in the new hit movie, Tango Shalom.

Guest Bio: Renée Taylor
Renée Taylor was born in the Bronx, New York to Frieda (née Silverstein) and Charles Wexler. She worked as a comedian in the early 1960s at the New York City nightclub Bon Soir. Her opening act was a then-unknown Barbra Streisand. She earned notice for her portrayal of Eva Braun in Mel Brooks's The Producers (1967) and continued to act in several films, television, and theater productions. However, despite an impressive, 50-year resume, she is better remembered as Sylvia Fine, the overbearing, classic Jewish mother of Fran Drescher's title character in The Nanny (1993).Instagram: @tangoshalom 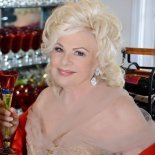 Today we have with us special guest Renee Taylor, who stars in the new hit movie, Tango Shalom. If you missed it at the theater, it's now available on all streaming and video-on-demand platforms across the US and Canada. Renee is an Oscar-nominated and Emmy award-winning actress. Her long list of credits includes Mel Brooks, The Producers, and the overbearing, but lovable mother of Fran Dresser's title character in The Nanny.

SPONSORED BY CARDIOMIRACLE: The most advanced heart-healthy nitric oxide booster in the world, with 50+ whole food nutrients. CardioMiracle.com [use promo code "CardioNow!" for 20% discount]
She co-wrote the Broadway comedy Lovers and Other Strangers, which earned her an Oscar nomination for the film adaptation, and she is starring in the new film Tango Shalom, which was co-written by her late husband, Joe baloney, and directed by her son, Gabriel.Today she sits down with Dr. Friedman to talk about that film, maintaining integrity, the secret to a great marriage (of 52 years), and waking up each day with zest and purpose!

More from this show . . .
Prev
Next
Boldly Go: Reflections on a Life of Awe and Wonder with William ShatnerLaughter is the Best Medicine