25 Years of "Tuesdays With Morrie" with Mitch Albom

Tuesdays with Morrie remained a New York Times bestseller for an astounding 350 weeks.

SPONSORED BY CARDIOMIRACLE: The most advanced heart-healthy nitric oxide booster in the world, with 50+ whole food nutrients. CardioMiracle.com [use promo code "CardioNow!" for 20% discount] 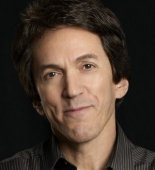 Back in 1995 when Ted Koppel was at ABC News, he did a feature on Nightline with a retired university professor named Morrie Schwartz, who was dying of ALS, also known as Lou Gehrig's Disease.

Among those viewers that evening was a young sports writer named Mitch Albom. Morrie just so happened to be his favorite and most beloved former college professor. They reconnected, and the insightful meetings that ensued led to the international number one bestselling book, Tuesdays with Morrie. It became a staple in classrooms and universities, and a four-time Emmy-winning TV movie.

SPONSORED BY CARDIOMIRACLE: The most advanced heart-healthy nitric oxide booster in the world, with 50+ whole food nutrients. CardioMiracle.com [use promo code "CardioNow!" for 20% discount]

Mitch just released the 25th anniversary edition. And he joins us today for some updates on the book that touched the hearts of millions of people across the globe.

More from this show . . .
Prev
Next
Let It Be Easy: Simple Ways to Stop Stressing & Start LivingDr. Andrew Ordon Reminisces About 13 Seasons as Host of "The Doctors," Shares the Best Skincare, Home Remedies, and More