Listen to What Your Kidneys Are Telling You

Download
Guest Info & Links: Orlando M. Gutiérrez, MD
From the Show: Wellness for Life
Summary: Kidney disease is the cause of many deaths in America. Find out how to pay attention to what your kidneys are trying to tell you.
Duration: 10
Host: Susanne Bennett, DC 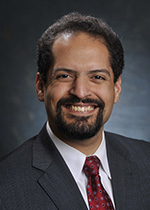 Orlando M. Gutiérrez, M.D., M.M.Sc., obtained his medical degree from the University of Toledo College of Medicine in 2002. He then completed internship and residency training at the Massachusetts General Hospital in Boston from 2002 to 2005, and a clinical and research fellowship in nephrology from the Brigham and Women’s Hospital/Massachusetts General Hospital Joint Nephrology Training Program in 2008. With the support of an American Kidney Fund Clinical Scientist in Nephrology Fellowship award, he completed a Masters in Medical Science degree in human clinical investigation from Harvard Medical School during his fellowship, graduating as the valedictorian of his class. Dr. Gutiérrez joined the faculty of the Division of Nephrology and Hypertension at the University of Miami Miller School of Medicine as an Assistant Professor of Medicine in 2008. He was then recruited to the University of Alabama at Birmingham in 2011, where he is currently an Assistant Professor of Medicine in the School of Medicine and an Assistant Professor of Epidemiology in the School of Public Health.  In addition, he serves as the section head for outcomes and epidemiology research in the Division of Nephrology at UAB.

Dr. Gutiérrez’s research is focused on understanding pathophysiological mechanisms underlying disorders of phosphorus and vitamin D metabolism in health and in individuals with kidney disease. He has a special interest in delineating environmental and/or behavioral factors that may modulate these associations, particularly those related to poverty and nutrition. His research has been published in high-impact journals such as the New England Journal of Medicine and Circulation, and he has been an invited speaker in numerous national and international conferences. He is currently supported by a Mentored Patient-Oriented Research Career Development Award (K23) from the NIH.

Kidney disease is one of the leading causes of death in America and affects as many as 31 million people. As such, it’s important for you to recognize the signs and symptoms associated with kidney disease.

Signs and Symptoms of Kidney Disease

As Dr. Orlando M. Gutiérrez points out, many of the people who develop kidney disease don’t even realize it, since early signs and symptoms can appear minor and almost absent.

As it progresses, later stages of kidney disease can result in swelling all over the body and constant itching caused by a release of toxins into the skin. If you are experiencing any of these symptoms, especially if you have diabetes or high blood pressure, speak to your physician as soon as possible.

Adding to diabetes and hypertension, African-Americans are also at high risk for kidney disease, as well as progression of kidney disease into kidney failure. If your family has a history of kidney disease, diabetes, or cardiovascular disease, make sure you keep a close watch on your kidney health.

There are several things you can do to keep your kidneys in good shape. For starters, reduce the amount of sodium you ingest. The kidneys play an important role in regulating blood pressure throughout the day, and one of their functions is to remove the extra salt you eat. The work needed to remove this salt, however, causes blood pressure to rise.

It’s recommended that you don’t eat more than 2.3 grams of sodium per day, which is equivalent to six grams of salt. If you already have kidney disease, your potassium levels may be elevated, so avoid using potassium salt substitutes that may cause even more problems.

Drinking water can also help regulate kidney function. The amount of water you should drink for optimal kidney health can vary depending on the season. During the summer when it’s hot and humid, Dr. Gutiérrez recommends drinking at least 6-8 glasses of water a day to restore lost fluids. During the fall and winter seasons, water isn’t lost as much as during summer, so you can get away with drinking a little less.

Perhaps the biggest takeaway Dr. Gutiérrez offers is that a huge factor in preventing kidney disease is your diet. There are many different things added to the food you eat to make it taste better and help preserve it; but a lot of those added ingredients can include extra sodium, unhealthy fats, and other unwanted elements.

Check labels and diligently avoid foods that contain high amounts of sodium. The less work you place on your kidneys, the easier time they’ll have removing salt and performing their functions properly.

In the accompanying audio segment, Dr. Orlando Gutiérrez, joins Wellness for Life Radio to tell you what to watch for when it comes to the health of your kidneys, as well as possible indications of kidney disease.

More from this show . . .
Prev
Next
Kidney Awareness & Prevention of DiseaseWhat's Trending in Health Apps?