Dr. Magali Haas founded Orion Bionetworks in July 2012 and serves as its CEO and President. Orion Bionetworks was transformed to Cohen Veterans Bioscience in 2015 to specifically dedicate research to improving the detection and treatment of post-traumatic stress (PTS) and traumatic brain injury (TBI) and related co-morbidities so that the burden of these conditions may be lessened on service members, veterans, and their families.

She served three years as Chief Science and Technology Officer for One Mind for Research, a nonprofit organization launched in May 2012 by Patrick J. Kennedy. She orchestrated the launch of One Mind’s seminal programs, Apollo, an informatics research portal and, Gemini, an international TBI/PTSD research program.

As an “intrapreneur” at J&J she established the first Neuroscience Translational Medicine & Integrative Solutions department, and co-founded the first Companion Diagnostics Center of Excellence as well as J&J’s Healthcare Innovation team. She serves on several advisory boards including Brain Canada, Prophase, Pear Therapeutics, PAASP and IMEC for nanoelectronics.

Magali earned her BS in bioengineering from the University of Pennsylvania, an MS in biomedical engineering from Rutgers University, New Jersey, and her MD and PhD with distinction in neuroscience from Albert Einstein College of Medicine, New York. 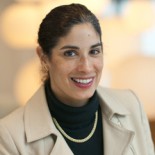 Some wartime injuries are missed or misdiagnosed. Both veterans and civilians may suffer traumatic brain injury (TBI) and post-traumatic stress disorder (PTSD).

Cohen Veterans Bioscience is focused on improving and detecting TBI, PTSD and related co-morbidities. A test that could detect TBI and PTSD via blood test or MRI would help the affected find appropriate treatment sooner.

For TBI, the Tau protein is a blood marker indicative of degenerative disease. It is relevant in brain anatomy of NFL players. It may be a biomarker of TBI via the blood.

For PTSD, there may be a genetic predisposition or enhanced risk. Most people who are exposed to a single trauma will recover. Only 10-20% will develop PTSD. Perhaps spotting these biomarkers for PTSD vulnerability can lead to enhanced training and preventative training to reduce or eliminate the impact of potential PTSD situations.

Listen as Dr. Magali Haas joins Dr. Susanne Bennett to share the how Cohen Veterans Bioscience is making headway in detecting TBI and PTSD to improve treatment options.
Tagged under

More from this show . . .
Prev
Next
Encore Episode: Curcumin: The Spice of LifeNatural Approach to Treating Behavioral Issues