EP 841 How Your Brain Shapes Your Life

Download
Guest Info & Links: David Eagleman, PhD
From the Show: YOU The Owners Manual Podcast
Summary: You've probably heard you use only 10% of your brain, but did you know that's actually a myth?
Duration: 16:17
Host: Michael Roizen, MD

Dr. David Eagleman is a neuroscientist and a New York Times bestselling author. He heads the Center for Science and Law, a national non-profit institute, and serves as an adjunct professor at Stanford University. He is best known for his work on sensory substitution, time perception, brain plasticity, synesthesia, and neuro law.

He is the writer and presenter of the international PBS series, The Brain with David Eagleman, and the author of the companion book, The Brain: The Story of You. Beyond his 100+ academic publications, he has published many popular books. His bestselling book, Incognito: The Secret Lives of the Brain, explores the neuroscience "under the hood" of the conscious mind: all the aspects of neural function to which we have no awareness or access.

His work of fiction, SUM, is an international bestseller published in 28 languages and turned into two operas. Why the Net Matters examines what the advent of the internet means on the timescale of civilizations. The award-winning Wednesday is Indigo Blue explores the neurological condition of synesthesia, in which the senses are blended.

Eagleman is a TED speaker, a Guggenheim Fellow, a winner of the McGovern Award for Excellence in Biomedical Communication, a Next Generation Texas Fellow, Vice-Chair on the World Economic Forum's Global Agenda Council on Neuroscience & Behaviour, a research fellow in the Institute for Ethics and Emerging Technologies, Chief Scientific Advisor for the Mind Science Foundation, and a board member of The Long Now Foundation.

He has served as an academic editor for several scientific journals. He was named Science Educator of the Year by the Society for Neuroscience, and was featured as one of the Brightest Idea Guys by Italy's Style magazine. He is founder of the company BrainCheck and the cofounder of the company NeoSensory.

He was the scientific advisor for the television drama Perception, and has been profiled on the Colbert Report, NOVA Science Now, the New Yorker, CNN's Next List, and many other venues.

He appears regularly on radio and television to discuss literature and science. 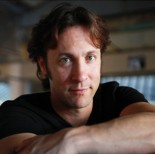 You've probably heard you use only 10% of your brain, but did you know that's actually a myth?

What else have you got wrong about your gray matter?

In this episode, Neuroscientist Dr. David Eagleman, author of The Brain: The Story of You and host of the PBS series The Brain, debunks common myths and shares little-known facts about the amazing human mind.

He explains how your brain shapes your reality and your decisions, and how those choices affect humanity at large.

Listen now to better understand yourself and your world by first understanding your brain.
Bonus!
3 Tricks to Dodge Fast Food Cravings
Tagged under

More from this show . . .
Prev
Next
EP 841 News of the WeekEP 842 How to Avoid Dangerous Heatstroke