EP 849 How to Avoid Overdose

Indra Cidambi, MD, is recognized as a leading expert and pioneer in the field of Addiction Medicine. She founded the Center for Network Therapy (CNT), New Jersey's first state licensed Ambulatory (Outpatient) Detoxification care and treatment facility, and currently serves as its Medical Director.

Dr. Cidambi works to help patients addicted to substances such as alcohol, anesthetics, benzodiazepines, opiates and suboxone. With CNT's superior client care and high quality treatment, Dr, Cidambi and her clinical team have successfully detoxed over 600 patients in nearly three years. With more than a decade experience in Addiction Medicine, Dr. Cidambi has in-depth knowledge and vast experience in addictive substances, treatment and rehabilitation. Before starting CNT's Ambulatory Detoxification program, Dr. Cidambi was the Director of Detoxification and Rehabilitation at Summit Oaks Hospital in Summit, New Jersey.

Dr. Cidambi received her medical degree from Tashkent State Medical Institute in the former U.S.S.R and completed her residency at Maimonides Medical Center in Brooklyn, New York. She was then selected for the prestigious Fellowship in Addiction Medicine at New York University/Bellevue Hospital in New York City. Dr. Cidambi is Board Certified in General Psychiatry and double Board Certified in Addiction Medicine (ABAM, ABPN). She is fluent in five languages, including Russian. 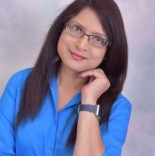 Just one dose or hit of a drug can leave you addicted. It can also kill you, especially with the rise in dangerous drug mixing.

Find out from Dr. Indra Cidambi the latest innovations in addiction prevention, including a pill that could block drug cravings.
Bonus!
7 Normal—And Not-So-Normal—Signs of Aging
Tagged under