EP 869B From Cancer Diagnosis to Survival

Download
Guest Info & Links: Laura Holmes Haddad
From the Show: YOU The Owners Manual Podcast
Summary: When Laura Holmes Haddad was diagnosed with stage IV inflammatory breast cancer, she was a yoga- and broccoli-loving woman who knew almost nothing about cancer.
Duration: 22:39
Host: Michael Roizen, MD

Laura Holmes Haddad received her BA from Smith College in Northampton, MA, where she majored in comparative government.

Laura spent one year studying international politics at the London School of Economics before enrolling in the chef’s program at the California Culinary Academy in San Francisco, CA (and received an AA degree). After working as a caterer in Northern California, she moved to New York City and became an assistant cookbook editor at Simon & Schuster. Five years later, Laura returned to her home state of California to pursue freelance writing and editing.

She is the author of Anything But Chardonnay: A Guide to the Other Grapes and co-author of Pure Flavor: 125 Fresh, All-American Recipes from the Pacific Northwest, Lulu Powers, Food to Flowers: Simple, Stylish Food for Easy Entertaining, Anna Getty’s Easy Green Organic, and I’m Dreaming of a Green Christmas.

After a three-year battle with breast cancer, Laura began writing about cancer and speaking about patient advocacy. When she’s not writing, Laura can be found hiking, paddle boarding, reading, cooking, or swinging on a rope swing with her kids.

She currently resides in Northern California with her husband, daughter, son, and a Dalmatian. 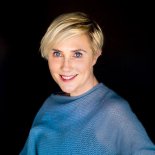 When Laura Holmes Haddad was diagnosed with stage IV inflammatory breast cancer, she was a yoga- and broccoli-loving woman who knew almost nothing about cancer.

In her book, This is Cancer: Everything You Need to Know, from the Waiting Room to the Bedroom, Haddad walks readers through all aspects of this illness with levity, from diagnosis to treatment and survival.

Supercharge your brain and reverse memory loss, pick up a copy of Memory Rescue today. - sponsor
She chats with Dr. Roizen about her success with experimental clinical trials and how other cancer patients can take advantage of this life-saving option. She also covers the importance of having an advocate and how to battle food cravings during treatment.

Bonus!
What Causes Constipation—and How to Deal
Sponsor: