Download
Guest Info & Links: Eben Alexander, MD & Karen Newell
From the Show: YOU The Owners Manual Podcast
Summary: Dr. Eben Alexander and Karen Newell explain what they can teach us about consciousness and reality and how they may point to the possibility of reincarnation.
Duration: 29:53
Host: Michael Roizen, MD

Guest Bio: Eben Alexander, MD & Karen Newell
Dr. Eben Alexander, MD, has been an academic neurosurgeon for the last 25 years, including 15 at the Brigham & Women’s Hospital, Children’s Hospital, and Harvard Medical School in Boston. The author of the New York Times bestsellers Proof of Heaven and The Map of Heaven, he lives in Charlottesville, VA.

Karen Newell is the creator of Sacred Acoustics, a method that uses sound to facilitate the journey into higher states. As an innovator in the emerging field of brainwave entrainment audio meditation, Karen empowers others in their journeys of self-discovery. Using Sacred Acoustics recordings, she teaches how to enter and engage your own consciousness in order to connect to inner guidance, achieve inspiration, improve wellness and develop intuition. 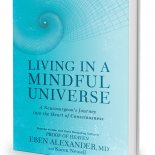 Dr. Eben Alexander was a neurosurgeon when he awoke one morning to a tremendous amount of pain.

Shortly after, he started to seizure and was rushed to a hospital where he was diagnosed with a rare, but fatal, form of E. coli. He spent the next seven days in a coma, with a 2% chance of survival. On the seventh day, he started to wake.

Supercharge your brain and reverse memory loss, pick up a copy of Memory Rescue today. - sponsor
He had no sense of language or memories, but he did have vivid, otherworldly experiences that felt more real than anything he'd known. Eight weeks later, all his memories, senses and speaking abilities came back.

In his book, Living in a Mindful Universe: A Neurosurgeon’s Journey into the Heart of Consciousness, Alexander and co-author Karen Newell discuss how near-death experiences can be spiritually transformative.

They explain what they can teach us about consciousness and reality and how they may point to the possibility of reincarnation.

More from this show . . .
Prev
Next
EP 869B From Cancer Diagnosis to SurvivalEP 870 News of the Week