Download
Guest Info & Links: David Lyons, Founder of the MS Fitness Challenge
From the Show: YOU The Owners Manual Podcast
Summary: When David Lyons was diagnosed with MS, he couldn't imagine life in a wheelchair. So, he set out to develop a plan that would keep him in shape, despite his invisible illness.
Duration: 17:29
Host: Michael Roizen, MD

David Lyons is the founder of the MS Fitness Challenge worldwide charity, alongside his wife Kendra Lyons R.N. The two developed the charity to educate and train people with multiple sclerosis and fitness professionals in the benefits of exercise, nutrition and mindset in winning the battle against MS. His cause is supported by entertainment celebrities, athletes and major corporations.

David competed with MS in an NPC bodybuilding contest winning the Most Inspirational Bodybuilder trophy in 2009 at the age of 50. He is the only person with MS to receive the Health Advocate Lifetime Achievement Award presented by Arnold Schwarzenegger in 2015. He was awarded the Health Advocate Achievement Award, alongside Lou Ferrigno, in 2013; the Lifetime Fitness Inspiration Award from the Global Bodybuilding in 2016; and the Special Recognition Award from the National Fitness Hall of Fame in 2017.

David was the recipient of The National Multiple Sclerosis Society’s MILESTONE AWARD for being “an individual who is relentless in the fight against MS, achieving significant milestones…” He has been featured on FOX, CBS and other TV networks and radio shows and featured in magazine articles internationally.

David is actively working with the Multiple Sclerosis Foundation on fitness education and training and he writes the MS Fitness Challenge column for EverydayHealth.com. He is also partnered with Practical Fitness Online with the MS Workouts service to bring ongoing online exercise programs to MSers worlwide. He is the author of his faith based autobiography David's Goliath and his newest book, Everyday Health & Fitness with Multiple Sclerosis, endorsed by fitness icon Tony Little with the foreword written by TV celebrity and entrepreneur Daymond John from Shark Tank, was #1 in new releases on Amazon.

David is the President/Co-Founder of the OptimalBody fitness brand and one of the Founding Partners of the National Fitness Hall of Fame Institute and a contributor to their Advanced Fitness Education Courses. He is also a speaker for the MedFit Network and MS Views & News on fitness, nutrition and mindset in battling MS.

David is recognized internationally as the “face of MS and fitness” and has been working with trainers in many countries educating them on fitness for people with MS. The National Federation of Professional Trainers (NFPT) has collaborated with David to bring the MS Fitness Essentials course for training the MS community to market. 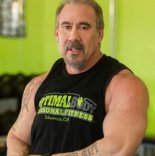 David Lyons was a healthy bodybuilder and gym owner when he was diagnosed with multiple sclerosis (MS) in 2006 at the age of 47.
Now you can save money on your life insurance just for being healthy. HealthIQ helps physically active people save up to 33% on their life insurance. Go to HealthIQ.com/ownersmanual to get a free quote. - sponsor

Lyons couldn't imagine life in a wheelchair, so he set out to develop a plan that would keep him in shape, despite his invisible illness.

In his book, Everyday Health and Fitness with Multiple Sclerosis, Lyons lays out practical tools to develop a healthy lifestyle, including tips for meal planning on a budget. Hear anecdotes from real people with MS, their limitations and how they followed this plan to reach their fitness goals.

Plus, find out how Lyons' plan may help you ditch your wheelchair.

Bonus!
Is Breakfast the Most Important Meal for Weight Loss?

Now you can save money on your life insurance just for being healthy. HealthIQ helps physically active people save up to 33% on their life insurance. Go to HealthIQ.com/ownersmanual to get a free quote.
Tagged under