Guest Bio: Merril Hoge, Ex-NFL Player
Merril Hoge is a former professional American football player, who currently serves as a head coach for Your Call Football. He played eight seasons at running back for the NFL's Pittsburgh Steelers and Chicago Bears, retiring after the 1994 season. He was also a football analyst for ESPN television, beginning in 1995 and regularly contributes to ESPN.com and to ESPN’s Sunday NFL Countdown, Monday Night Football and Super Bowl and NFL Draft coverage. 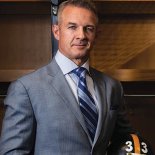 At the time, football was heavily influenced by a tough guy culture, and little was known about concussions and their potentially dangerous effects. Then the tragic death of Hoge’s ex-teammate Mike Webster in 2002 launched a wave of fear after an autopsy determined he suffered from an obscure brain disease—chronic traumatic encephalopathy (CTE).

The media pounced. Concern over player safety soon became a war on football at every level, with one scientist even declaring youth football “child abuse.”

Merril and Dr. Willeumier discuss his new book, BRAINWASHED, in this important two-part series that explores the scientific advancements in the area of CTE research.
Tagged under

More from this show . . .
Prev
Next
The Latest in Brain Research TechnologyBrainwashed: Ex-NFL Star Merril Hoge Explains the Bad Science Behind CTE, Part 2